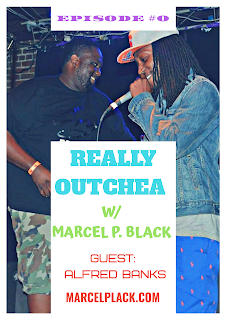 Click here to listen to Really Outchea Podcast Episode #0
Mane... Welcome to the "Really Outchea Podcast," I'm your host, Marcel P. Black lol. So yeah, I decided to do a "pilot" episode with my brother Alfred Banks, and we kicked like we always do every other day. We talked about how we first met, crazy tour stories, played some old music we have together, the negative effect of the pandemic on his career as an indie touring artist, his new group SaxKixAve, & the importance of mental health. You can follow Alfred @: Facebook: Alfred Banks Instagram: @underdogcentral Twitter: @underdogcentral Bandcamp: underdogcentral.bandcamp.com New interviews online every Thursday beginning December 3rd, 2020. For all heads interested in being interviewed on the Really Outchea Podcast email your social media links, website, and youtube videos to reallyoutcheapodcast@gmail.com for consideration. 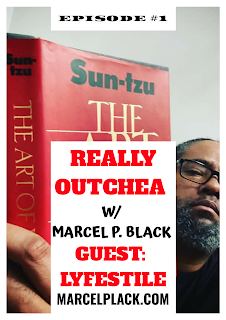 Really Outchea Podcast Episode #1 w/ Lyfestyle
This weeks special guest is St. Louis Missouri Hip-Hop veteran Lyfestile. In this ep, Lyfe & I discuss the early days of St. Louis Hip-Hop, social activism in STL before & after the murder of Mike Brown, and Ageism in Hip-Hop. We also get into some of his new music!!!
You can follow Lyfestile @:
Facebook: Scott Woods
Instagram: @lyfestile7
Twitter: @lyfestile7
Bandcamp: somethingwonderfulrecords.bandcamp.com
For all heads interested in being interviewed on the Really Outchea Podcast email your social media links, website, and youtube videos to reallyoutcheapodcast@gmail.com for consideration. 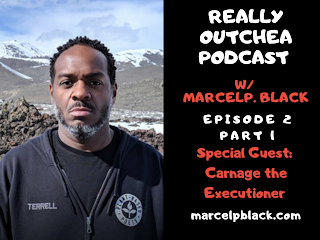 This episode is special. Me & Terrell sat and talked so long (2 hours & 40 mins) that he we had to break it down in 2 parts!!! We talked about his origins in the Twin Cities Hip-Hop scene, how he created his style, his new album "Ravenous," and much much more. This literally is a master class in session in podcast form.
Part 2 next week!!!!
Click here to watch Ep. 2, Pt. 1 with Carnage The Executioner
You can follow Carnage @:
Facebook: Terrell Woods
Instagram: @carnagetheexecutioner
Twitter: @carnageXXXL
Bandcamp: carnagetheexecutioner.bandcamp.com 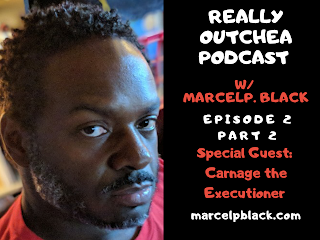 Ok, finally we're back with part two of my incredible conversation with Carnage The Executioner. On this half we dig deeper in to his "Ravenous" album, his "Eat To Live" song, his weight loss journey and healthy eating, trade tour stories, and discuss the importance of selling merch during the pandemic. There's so much wisdom & #FreeGame being dropped here it's ridiculous. Again a master class discussion between to hard working indie emcees.
You can watch Part 2 Here:
You can follow Carnage @:
Facebook: Terrell Woods
Instagram: @carnagetheexecutioner
Twitter: @carnageXXXL
Bandcamp: carnagetheexecutioner.bandcamp.com 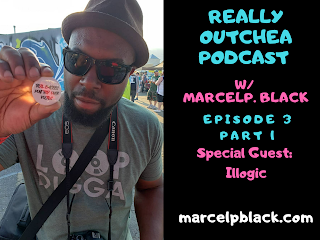 It was an absolute pleasure & honor to sit with Columbus, Ohio's own legendary elite level emcee/producer/podcaster/author Illogic to talk all things Hip-Hop. In part one of our conversation, we talked about his beginnings as an emcee, the state of underground Hip-Hop, our preferences of Southern Hip-Hop, & much much more.
You can watch Part 1 here 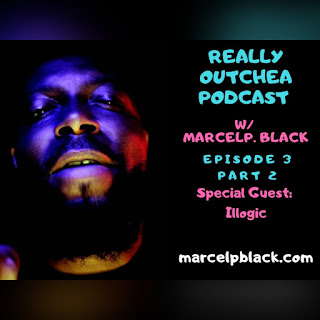 On this episode, we pick back up with Illogic talking about maintaining fanbases while quarantining, the status of the next Greenhouse project, why Black people don't support underground Hip-Hop, the challenge of balancing the family life with being an artist, plus more.
Watch Part 2 with Illogic here: 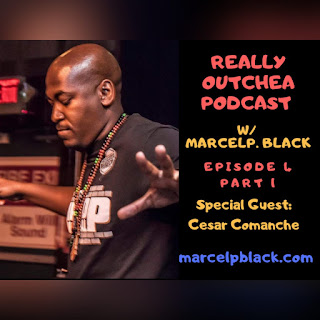 On this episode of the "Really Outchea Podcast" I sat with North Carolina Hip-hop legend Cesar Comanche from the iconic Justus League. On part 1 of our convo, we talk about his support of the "Stop Rapping Over Vocals" Movement, the early days of the Justus League, and what it's like working with 9th Wonder. Lots of gems in here!!!
You can watch the podcast here: 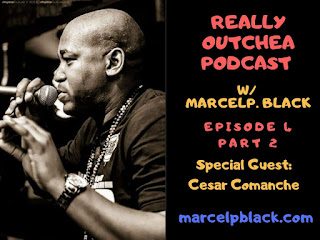 On part 2 of my convo with Cesar, we discuss the way he picks beats, European tour stories, maintaining relevancy during the pandemic, and the future for DIY artists on the other side of Covid-19.
Lot of gems being dropped here.
You can watch Part 2 here: 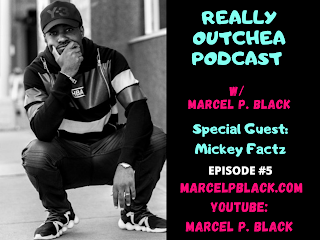 Mane's it's been a minute but I'm back!!! Hopped right back in the pod game with one of the best lyricists in the culture, Boogie Down Bronx native Mickey Factz!!! Had a dope convo about everything from his beginnings to the blog/Hipster era, to todays climate as an indie emcee. He was every open about his ups & downs as an artist, his success as a ghostwriter, and how becoming a family man changed his career as an emcee.
You can check out all things Mickey Factz at https://www.mickeyfactz.com/. 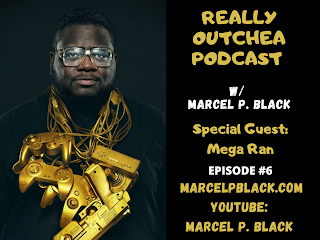 Super blessed to catch up with my big cousin Ran on the "Really Outchea Podcast" and have a dope convo about everything from his up bringing in Philly, how his former career as a teacher influences him as an artist, our personal music connection, being Black in Nerdcore, and his new book, "Dream Master."
Check him out on megaran.com.
Click here to watch Ep. 6 w/ Mega Ran 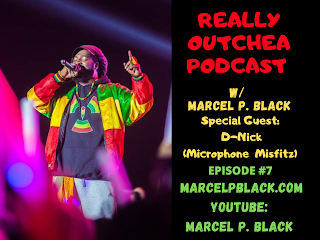 On this episode of the "Really Outchea Podcast," I check up with the lead emcee of Chicago HIp-Hop group the Microphone Misfitz, D-Nick. We had a dope convo about his beginnings in Flint, Michigan, breaking into the Chicago Hip-Hop scene, how his group was able to tour in China when rap is banned, and much more. Be sure to check Nick & the Fitz out @ themusicalmisfitz.com.
Watch Episode 7 here. 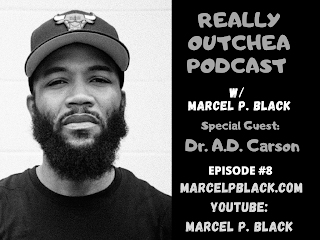 Mane, this convo was lit. I chopped it up with my guy Dr. A.D. Carson, a Hip-Hop Professor @ the University of Virginia, who first came to recognition after he successfully defended his PHD dissertation with a 34 track Hip-Hop mixtape. We talked about his life as an emcee coming up in Decatur, Illinois, his inspirations for making is dissertation a mixtape, his Hip-Hop and The Global South course @ UVA, and his most recent album "I Used To Love to Dream,: plus much more. 2 educators who love Hip-Hop nerding out... Good stuff.
Check out AD's work @ aydeethegreat.com.
Click here to watch ep. 8 with A.D. Carson 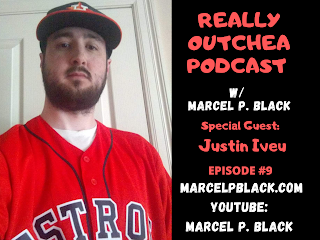 In this episode I caught up with good friend Justin Ivey, a nationally recognized Hip-Hop journalist, and host of the new "Never Less Than Ill" Podcast. We talk about how he got into Hip-Hop journalism, his time working for Kevin Nottingham, why he left Hip-Hop DX, and his opinions on white people being guests in Hip-Hop. Great discussion!!!
Really Outchea Podcast w/ Justin Ivey 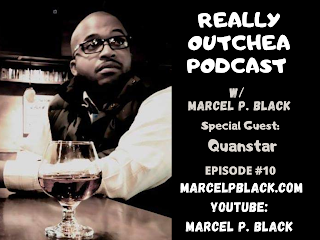 Mane, I sat down with my "big cousin," Compton born, ATL residing emcee/chef/tech genius/entrepreneur Quanstar, and man did we run it. We talked about his early days with Hip-Hop on the westcoast, his decision to move to Atlanta in the mid-90''s, his relationship with Dres The Beatnik, his new album "They Told Me This Would Sell," plus a lot more. You can check out everything Quanstar @ https://quanstarmusic.com..
Click here to watch episode 10 with Quanstar 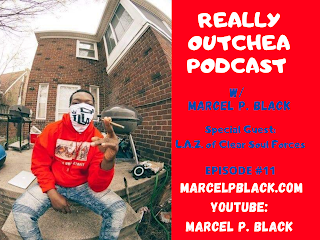 On this episode I was album I was able to catch up with my guy L.A.Z. of Clear Soul Forces and the Illaz and mane did we run it. We discussed how he first got into emceeing, the legendary Clear Soul Forces origin story, the tragedy & triumph behind CSF"s classic "Get No Better" record, his crew Da Illaz and much more.
You can learn more about L.A.Z. @ daillaz.com.
Click here to watch Ep. 11: 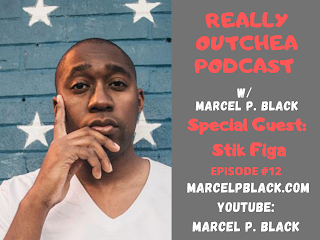 Mane, I was able to link with my guy, Kansas Hip-Hop legend Stik Figa. We talked about his origins as an emcee grinding it out between Memphis, his hometown Topeka, Kansas, grinding in a small market, finding acclaim in the blog era, his relationship with Oddisee & Mello Music, plus more. Check out his latest self title EP @ at his bandcamp..
Click here to watch ep. 12 with Stik Figa.