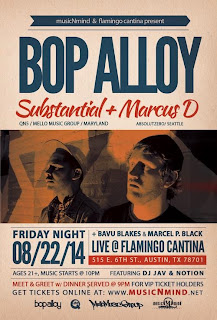 I'm honored & delighted to hit the road for the first time to Austin to rock with Bop Alloy & Bavu Blakes. This will be a great time. You can get your pre sale tix @ http://musicnmind.wordpress.com/2014/07/13/aug29flamingocantina/.
Posted by Marcel P. Black at 10:44 AM No comments:

Check out Marcel's interview with Marcel P. Black about the current state of Hip-Hop in Baton Rouge. 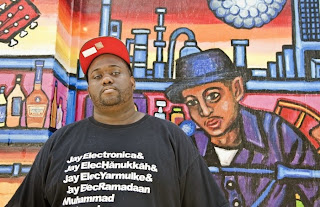 
By Pat Gunther
Baton Rouge, in many aspects, would be regarded in a sad state of affairs. High murder rates, abysmal public education and an ever-present drug problem have affected the city for years. Though these problems plague a large part of the community, many young people have sought music as their outlet of expression, and, ideally a ticket to a better life.

When I asked Baton Rouge-by-Oklahoma MC Marcel P. Black about what distinguishes the Red Stick from other cities, his response was cut and dry. “I think just the stories here,” Black said. “Homicide, bad education, young people in poverty, a lot of that music deals with that drug culture, violence, and poor education and all that.”

Black, who performed Saturday at the Spanish Moon as part of The BR Hip Hop Project’s “Hip Hop is Alive” show, realizes the abundance of problems in Baton Rouge like many others, but unlike most, can see how they are sometimes spun in a positive direction.

“These are cats that are from the street, or college kids or working kids who get to tell their story of what’s going on,” he said, “And they can articulate these exact experiences and conditions as an outlet for them.”

Marcel P. Black, a youth development worker by trade, has spent over a decade traveling the Southern and Midwestern States performing his music. Black has settled down across the South, including stints in Oklahoma and now most recently Baton Rouge. Since witnessing first-hand the rise of hip-hop juggernauts Lil’ Boosie and Kevin Gates, Black has seen all the ebbs and flows that have been present in Baton Rouge’s rap scene.

“In Baton Rouge, I mean around the same time [Gates and Boosie] were in jail, a couple rappers stepped in their place, like Young Ready,” Black said, “Baton Rouge had a pretty rich underground scene, which was kinda more reminiscent of Mos Def than Boosie or A Tribe Called Quest instead of Gates,” he continued. “Most of the guys was outta state and come 2010, there was a crop of kids from 17-21 who were really talented, and had a mix of traditional sound,” Black elaborated. “That side kinda developed a whole lot more in the absence of these big stars. Luckily, some of those guys were able to make a name for themselves,” he added before noting that Boosie is still the king of the Red Stick.

“It’s a business; just making good music ain’t enough,” Black asserted. “You need to understand copyrights, licensing and royalties because that’s how you monetize a situation.

“You have to understand your demographic and know your fan base, and you need to establish relationships with all of those people,” he offered up before stating an often forgotten, yet crucial piece of advice: “You have to have a good working relationship with your fans.”

In a city that is often cast aside in favor of hip-hop meccas such as New Orleans, Houston and Atlanta, veterans of the game such as Marcel P. Black make their presence known to the younger generations. “We’ve been making great music and there’s some people wising up to it or whatever,” Black said, “Once we get more educated and work harder to find and engage our demographic and build our fan bases, I think we can’t be stopped.

“I think we have as much talent and as unique of a story as anywhere in the country.” 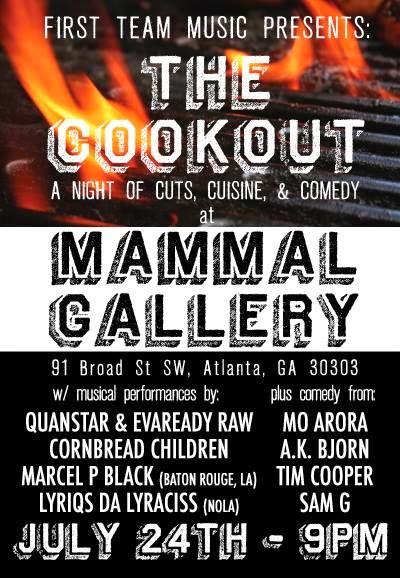 This will by my first time back in Atlanta since A3C last year. If you in ATL, come thru.
Posted by Marcel P. Black at 10:11 AM No comments: