On The Bluff with Marcel P. Black & Jimi Jump (Video) on ThaAntidote.com

I was supposed to be shooting a promo for the "I Got Next" event back in June, but me & my good friend got to talkin & Joe cut on the camera and caught 2 old friends runnin down some serious game.

Check it out on ThaAntidote.com
Posted by Marcel P. Black at 10:02 AM No comments: 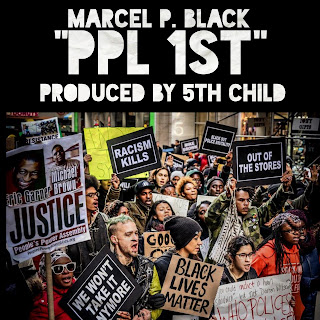 With all that's going on in African America, I've been silently working on a short ep titled "Freedom Summer." The goal was to wait till all the songs were finished then drop it outta nowhere, but something has been bugging me to put something out...

So here is me dedicating myself to the people fighting to overcome the struggle, produced by my good friend 5th Child from Jackson, MS.

The rest of the "Freedom Summer" will come out when it's done.

Jive Flamingo's write up on BR Hip-Hop Projects "I Got Next: Hip-Hop Open Mic Competition/Emcee Showcase"

Host Marcel P. Black announces the winners of the first “I Got Next” Hip-Hop Showcase
Baton Rouge Hip Hop is alive.
It takes some looking for. Boosie, Gates, and Webbie don’t live in the city limits anymore, and 94.1 doesn’t play any local music. You can really only see it at a handful of venues and hear it during designated programming hours on a few community radio stations. Most clubs and stations are content playing and publicizing top 40 and top 20 hits.

Music provided by local DJ MikeLarry.
The first “I Got Next” open mic competition, hosted by the BR Hip Hop Project at Culture Reggae Club, shows that the situation we’ve got in Baton Rouge isn’t due to lack of quality musicians, and shows there’s hope for the future of local rap. Ten artists participated in the event on June 19:
Cardell Flare was supposed to perform, but suffered injury in a car accident and wasn’t able to make it. DJ Mikelarry took care of the scratches and spins, and, for a show set during the middle of the summer, it did remarkably well.

Winning duo “The Monastery” performs in the Final Round.
The event featured these ten emcee’s in a bracketed rap battle showcase, and the intensity of the competition encouraged everybody to bring their A game. The Monastery took home the crown, with Gho$twriter coming in second. “When we won, I felt like people were finally seeing how ambitious we are. I felt like the 6-hr drive was worth every ounce of gas, and I felt like we had reached a new plateau in our rap journey. I was elated,” Carlos Charm of The Monastery said.
I sat down to talk with the man behind BR Hip Hop Project,Marcel P. Black, about the event, the scene, and what it really needs to thrive.
Marcel has been in Baton Rouge for 13 years, a transplant from Oklahoma. He started the BR Hip Hop Project by himself in the summer of 2012, but eventually put Justin Ivey, Matt Bruce, Mark Wallace, and DJ Automatik on the team. As a teacher full-time, he has a constant desire to help artists help themselves. “I’m a mentor by trade,” he says.

Host/Emcee Marcel P. Black
Marcel organized the open mic – his first since 2011 – not only as a way to have some fun, but as a way to mentor and cultivate a scene in Baton Rouge. It was the open mic done right – a competition with thought and consideration given to the artists and their financial and networking needs. In the music world, everybody benefits when you put different people in the same room, from different places and with different assets and ideas.
In addition to the ten competing in the open mic, the event had three “featured performers”: Dude With No Name (BR),Billsberry Flowboy (NO), and Crisis (Memphis), all selected by Marcel as a different model of professional and successful emcee. Dude With No Name is one of the few local musicians to take initiative and put his releases in local record stores. Crisis is from Memphis and knows how to travel. Billsberry Flowboy never holds any bars when he raps, and is a proficient battler. “I can preach to em all day long,” Marcel says, “but if they’re not in Atlanta with me or Houston with me to see how I move, what I say don’t make sense. So I wanted to get other artists to model it for me, so it don’t sound like just me preaching.”
Some of it was more overt: to even be considered to compete, the artists had to send in an Electronic Press Kit (EPK) containing links to online hosted music, social media accounts, a biography, and a video of a performance. Putting together an EPK is an extremely beneficial task for an artist, but one that is often overlooked.

Rapper Paco (Birmingham, AL) from The Monastery
Marcel believes that too many up-and-coming musicians are caught up in an old business model – they try to make a hit single and sit around hoping that some DJ somewhere will help blow it up. “It ain’t since the 90’s that somebody’s had a song so big, Puff Daddy heard it in the barbershop and went ‘who’s this rapping, let me give him a record deal.’ It’s an outdated model.”
Nowadays, “you gotta be on your independent grind. You gotta make things happen for yourself and let everybody else come to you. You gotta put yourself in the position to where you can create opportunities for yourself, as opposed to sitting back, being mad and frustrated that somebody won’t give you something.”
There are artists in every facet of the music industry that neglect the entrepreneurial side of what’s going on. Music is an extremely creative business, but it’s still a business, and musicians offer a very valuable service. By neglecting to take up the mantle and create opportunities for themselves, musicians are prime for getting exploited, or just don’t see the success and popularity that they should. On the other hand, pandering to what the market or audience demands (or what you think they want) is patently false, and everybody can tell it isn’t genuine. Like everything else, it seems to be all about balance.

One of 3 featured performers, rapper Billsberry Flowboy
Baton Rouge Hip Hop Project is around to help promote that balance. They put on shows, book, promote, and whatever else the community needs. “I feel like it’s our duty, as lovers of hip hop, and people who understand the talent that’s in Baton Rouge, to try to build a scene,”Marcel says. “So first things first – we gotta get our artists mobilized.”
If Baton Rouge can develop a strong community of musicians producing consistently good content, there’s nothing that can keep that community from growing. These musicians need to take advantage of the resources they’ve been given, and be confident enough to put themselves out there and make mistakes worth learning from. In the age of the internet, there’s less and less knowledge that’s beyond the typical person’s reach – you can learn about marketing, licensing, promoting, performing. There’s almost no reason not to get out and get yours. Eventually, forces from beyond the city will talk about what’s going on here, book shows here, and build up our local musicians.
“Baton Rouge Hip Hop Project – we all understand the importance of having a scene that’s prominent here'” Marcel says. “Cause we go to concerts all the time. We have to go to New Orleans, have to go to Dallas or something to catch an act that we would like. Even independent acts or whatever. For the most part, we’re tired of seeing people skip over Baton Rouge when it comes to concerts.”

Marcel passes the mic to local rapper Gho$twriter in the final round.
Marcel says the number one thing the scene needs is a tight community. “The artists gotta support themselves. And when I say support themselves, I mean support the scene. There’s so many rappers that wanna be on these shows… If every rapper that wanted to be on the bill showed up, you got 100 people in the audience right there. And with that said, you gotta bring your fans. The scene needs fans. Y’know, after a while, rappers get tired of rapping to other rappers. We need more people in the audience. Every single person that loves hip hop, who loves live entertainment, or who just wants to do something different, they should take a chance on it.”
“Another thing is we need to be more organized. Less politics, more organization, in terms of what we’re trying to do as a collective. It’s problematic to me when this group of people has a conflict with this other group of people… so they just shut each other out. That hurts everybody.”
When people withdraw support like that, sales and attendance go down at shows. And if they have a gig that hurts the bottom line, venues become less likely to book another hip hop show in the future. Then nobody ends up being able to book there.

Featured Hip-Hop Artist Crisis from Memphis, TN
Marcel acknowledges that it’s an uphill battle. 91.1 KLSU and 96.9 WHYR have underground hip hop programs, but 94.1 stopped playing any local music when it was bought by Cumulus. Spanish Moon, Culture Reggae Club, and Chelsea’s are some of the few venues where you can see an independent hip hop show, but even clubs on the North side aren’t that much of an outlet for local creatives, instead just letting a DJ spin whatever’s popular. “I would like to see more venues and more spaces willing to take a chance on artists or acts that they normally don’t have, and not be afraid to let particular demographics come in a spot and do whatever,” Marcel says.“Everybody loves hip hop. Regardless of content, everybody wants to put their hand in the air, while they got a beer in the other one, and have a good time.”
Marcel and the BR Hip Hop Project are working for a future in which Baton Rouge hip hop will be alive and well, and require a little bit less hunting to find. Marcel says, “Baton Rouge has a very particular story that needs to be told. The world needs to hear what the city has to say.”
–Ty Simmons
Photos by Chelsea Layne.
Like BR Hip Hop Project on Facebook!
Click here for original post.
Posted by Marcel P. Black at 12:37 AM No comments:

Huge s/o @ thaantidote.com for the vid.
Posted by Marcel P. Black at 4:37 PM No comments: 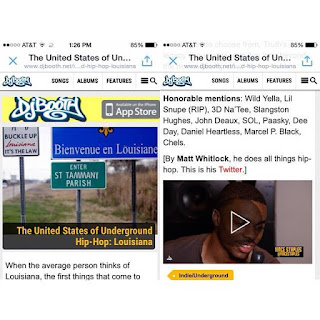 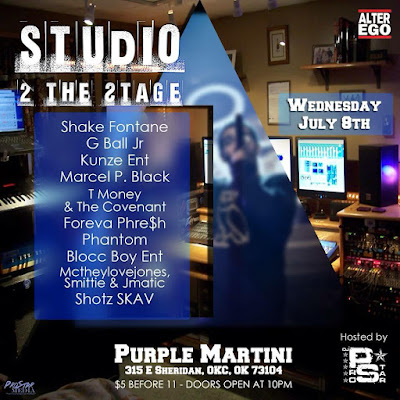 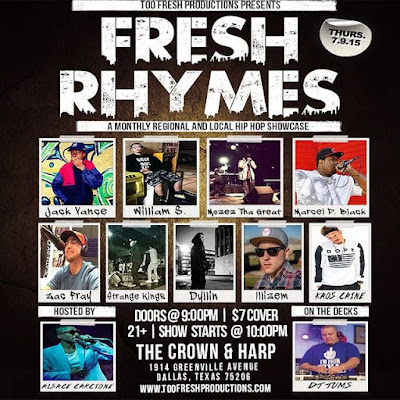 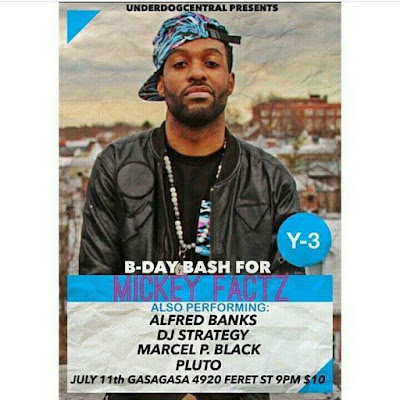 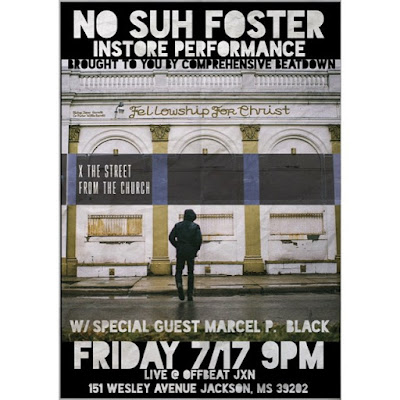 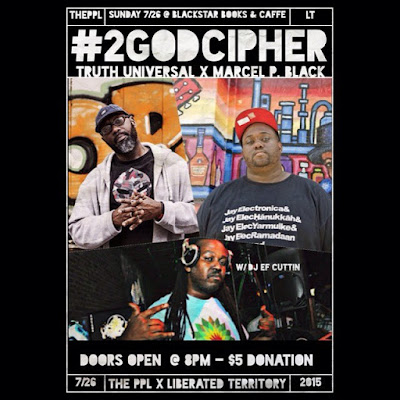