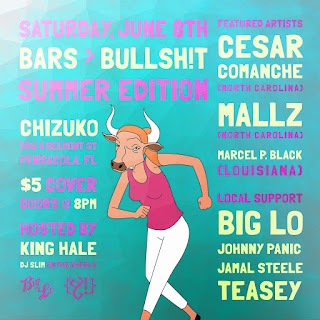 If you go back to #RapRecap #7, you'll read how the homie Stess The Emcee punched me in the chest with a truth bomb that changed everything. Coming back to Pensacola and kickin' some ass on stage was all the way on my mind, and I've worked really hard over the last few months both on stage and in the gym to make sure my set was as tight as it possibly could be. Plus I haven't done the Bars > BS concert series since October of 2017, and it was a must I come back strong. Rocking with my PCola fam Jamal Steele, Johnny Panic, and Big Lo is always fun, add the legendary Cesar Comanche to the mix and we're in for a night with elite level of live emceeing. 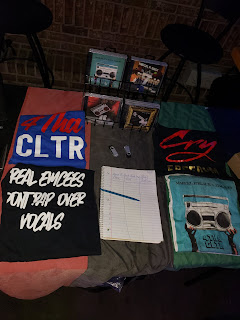 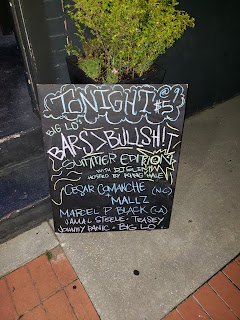 This blog won't be as long as the others. Wasn't alot of of drama in this story, it was strictly business. Sean Elliot and I get to the hotel in Pensacola around 1pm, and it's super duper trash. I stayed here before, and knew it was gonna be trash, but Pensacola is a vacation destination because of it's beaches, so the hotels are always high af in the spring & summer. This hotel was one of the few in the whole city under $100. Niggas was tryinna be economical, so mf's had to bite the bullet.

After checking in we chill in the room watching BET's marathon of all things Tupac related, before heading to the venue to set up for the night. We get to the venue right around 8:30pm, and greet all the homies, as I introduce Sean to everyone. Sean and I set our merch up next to the homie Mallz from NC, the brother who's currently touring with Cesar this summer. 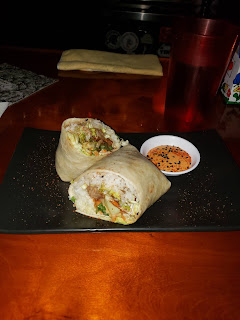 LETS EAT
The venue, Chizuko, is a bar owned by two lesbian women, that doesn't sell hard liquor, but they got delicious vegan food. I hadn't eaten since like 1:30pm, and this diabetic hunger hit different, so I order the vegan BBQ chicken wrap, and mane was that bih delicious.

As soon as I finish eating, they start the show, at 9:20pm. The host, King Hale, is not playing about this show running on time, and I'm here for it all. I hattttttteeee shows in which they don't start till damn near 11pm and end at 2am.

Ain't nobody got time for that. 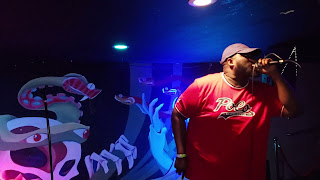 Johnny Panic goes up first, kills it. I really like his new music, alot. Mallz from NC goes up 2nd, and though I've been friends with him on social media for a few years, I've never met him in real life, and honestly wasn't too familiar with his music. Dude is a seasoned vet, and rocked a solid set how seasoned veterans rock. Teasey was next up with a lot of dope energy, and a hype man that had a cracking up because he was so into it. The hometown hero Big Lo kills his shit like he consistenly does in socks and Adidas slides, and of course he comes out his shirt by the 4th song like Jodeci in '94. Lemme get down to 350, I'm pullin' a whole Rick Ross fat dude with no shirt act. Accept I never was a CO and I don't have seizures or tattoos. Or Wingstops or Rally's. Or a Maybach.

Jamal Steele is next, and he's really become one of the most improved and lowkey one of my favorite performers on the circuit. He's a church boy like me and still Black as ever, and never sacrifices either, and it makes for really engaging and powerful music sans profanity or any other silly rap nigga shit. He performs his heart out every time, and I dig it. 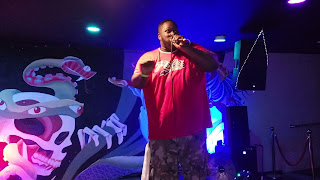 MY TIME TO SHINE

Intentionally, I'm a backbacker. I'm a fan of deep ass rappity rap rap, I listen to mostly boom bap ass underground rap in the Rap Dad Minivan when I ride. I love that type of Hip-Hop, I support it, and really try to keep that culture alive as a facilitator and a fan. As an artist I try to keep that intent in anytype of art I create, even if it's outside of what "real traditional underground Hip-Hop" sounds like. I knew with the other artists on the bill, there was gonna be a lot of boom bap/soul samples going on, but I decided to be a little different, as always.

The fact that I'm an underground conscious rapper who keep it backpack over country rap tunes, trap beats, any kinda sounding beat you can think of makes me special, as an emcee and performer. So after I hit em with my "daddy sang gospel" intro acapella, I came with "Black God Fresh," a song about about getting money, wearing Polo, mental health, the epidemic of white people calling the police on Black people for simply existing, my love for strip clubs, and how the God is a Black woman. All over a country rap tunes beat made for the club/radio. And it goes well. To keep in this tradition, I come with "Boss," another down south ass banger about organizing gangs to go to war with the laws that are a war with us. My conscious ass got the whole venue screaming "BOSS MOTHERFUCKA!!!!" at the end of each hook. 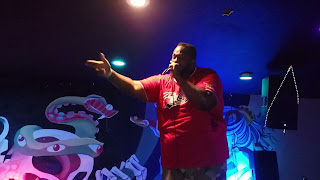 Now we enter the boom bap section of the night with "Principles & Standards." If you read the last time I was in PCola I kept fucking up on this song, because it was the first time I performed it, and I kept apologizing. Fuck all that, never again. I was so locked in on this record I wanted to execute it flawlessly. I think I damn near did, also showing that you can be Southern/country as a mother fucker and still be Hip-Hop to the core.

Getchu somebody that can do both.

The crowd enjoyed both the "too many wack rappers/not enough emcees chant" in the beginning, as well as the "real emcees dont rap over vocals" mantra that we live by. I wish Stess was here to see this. I run into "Henry Clay," execute flawlessy, then go into "Hallelujah" with no pause, ending the song preaching my ass off about how Trump is a terrible fucking piece of shit human being, and what's happening with Puerto Rico being left for dolo post hurricane as well as what's happening at the border with asylum seekers is a crime against humanity. Had the whole crowd saying "Fuck Donald Trump," "Peace To Puerto Rico," "No Human Is Illegal," and my new favorite, "Fuck That Wall."

From there I flow into "#FreeBLKPPL," aiming to articulate the fears & pain of being a Black man tryinna survive the everyday struggle that is being Black in America. I say this, because this is what was going through my mind as I aimed to look each and every person in the venue who I could see in the eye in hopes of making them feel where I'm coming from.

Not saying it worked, but noone booed me, so that's that.

Nah, fuck that, it worked. 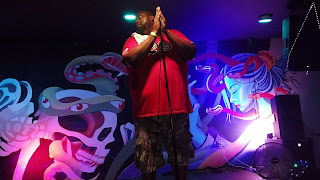 As always, we end in church, this time with "Stare & Whisper," complete with prayer hands, hand claps, and people acting as witnesses, waiving their hands side to side.

Got mad props off the stage, with the biggest compliment coming from Big Lo saying that I look so much better on stage with the weight loss and he can see the work I'm putting in the gym and how it's impacting my live show in a positive way.

CROWD: 4/5. Lighter than normaly, but still great. This is a venue owned by two lesbian women that server vegan food during Pride Month, lowkey the most open minded people that I'm gonna get to rap my Black ass conscious raps outchea, period.