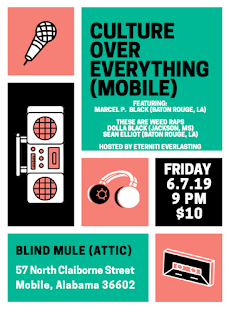 It was summer of 2013, the first time I went to Mobile, Alabama to rap with Alfred Banks and DJ Strategy. Alfred had been booked for a showcase in Mobile called Elements, promoted by Poet Tree's own Seth Maness. Thing is, Seth didn't book me, he only booked Alfred for a 45 minute set, but Alfred gave me 15 minutes to open up for him. This is what we did back then. I getta city, bring him, get him some time, he get a city, bring me, give me some time. We literally did this until the promoters would like us enough to give us our own sets, whether we were together or not.

Now rappers, I don't necessarily suggest you do this, even though I did it. It's kinda bad ettiquite to be sneaking on sets, and can sometimes mess up the flow of the show, and maybe turn some people away who came to see the person your opening for. And then the promotional aspect of it, it's really not fair to the person who's doing the booking. But Seth didn't trip. He enjoyed what I did so much he started bookin me in Mobile at least twice a year. I headlined my own Elements a few times, opened for Dee-1, and was even able to bring Locksmith's tour to Mobile because of Seth in May of 2018.

I remember about 18 months ago, Mr. 88 gave me a call and told me Seth was terminally ill with cancer, and he and some of the guys were doing a surprise benefit to help him and his family with medical bills and other expenses. I immdediately called Alfred, and we rocked it. Less than a month later I returned to rock with Locksmith for his "Louder Than Words" tour. That was the last time I saw Seth. He had lost a lot of weight, but still had the biggest smile in the room.

Seth transitioned earlier this Spring. Seth was a loving family man, and a warrior for Hip-Hop culture at large, specifically in the Gulf region. He is the reason why I can call Mob-Town a "home city," he is the reason I have so many friends and fans in Mobile, it is because of him I've brought nearly 10 different artists from Mobile to BR over the last 5 years. He's been an invaluable part of me establishing myself as a "regional artist," for that I will be forever greatful. Rest well my friend. 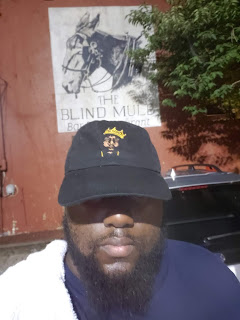 I pick up Sean Elliot from his crib in Central, and he wasn't quite ready to go yet. While he's inside gathering the last of his belongings, I see a cop harrassing this white dude in the parking lot. I got my camera on record if something go down, especially if he sees my big Black ass there watching the whole thing with the car running and comes to question. After about 15 minutes of questionsing, the cop leaves, Sean comes out, and we slab.

Sean is a 2 time #FadeToFlowSundaysAlumni and is a very talented producer, and a capable rapper. Fairly new to rapping and performing, one of his strongest assets is cool ass easy to get along with personality, and his incredible work ethic. He listens and pays attention well, and it's working for him. I wanted to take him on the road with me to get a look at what it is on the road with me, performing with a higher level of talent than what he has been accostumed to at the showcases and open mics in Baton Rouge where most of the artists are still up & coming and honing their craft. The fact that Sean is cool as a motherfucker made this 2.5 hour trip an easy ride. 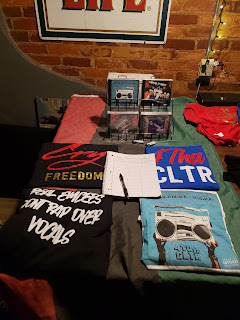 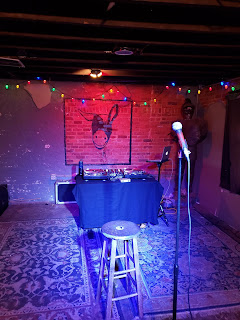 Upon arriving to Mobile, Sean and I check in to the hotel, then go get food. Chill for a li'l bit, then head over to the venue to set up our merch tables. We've been all the other acts there, but meet the manager for our stage who assists us in setting up. From there, we wait. And wait. And wait. Fresh off of work, Eterniti Everlasting arrives, and tells us we get a free meal and a few free drinks.

I'm sober for the time being, but I'm all the way here for a free meal. I go order a chicken wrap & fries, and watch game 4 of the finals. As I'm eating, Dolla Black arrives, as well as These Weed Raps. All is well, the only problem is, the audience is slow arriving. After waiting, and eating, we find out that everyone is at the Mystikal concert across town.

Oh well, the show must go on, #CultureOverEverything. Right? 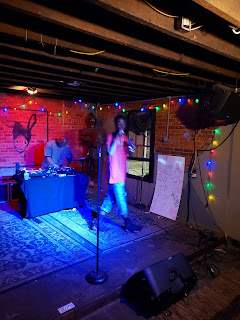 LET'S GET IT STARTED

The show finally begins with Eterniti and his man's (I forgot your name dawg, but I know you went to SU, go Jags... lol), accompanied by DJ Money Mic to break the ice. Dope. Then we begin with Sean Elliot. I can see the nerves with Sean a bit, being his first Alabama show, the furthest he's been away from home to rap, and maybe anticipating that the playing field was a bit more competitive than what he's used to back in BR. He does well in the beginning, stumbling a few times on a song he hasn't performed in a long time, but shook back in a major way with his two biggest singles to date, "Big Boy" & "Cool 2." He really made a good impression with the last two records, being that Alabama is with all of the country rap tunes/slim playa ass rap, and that's what Sean does best. 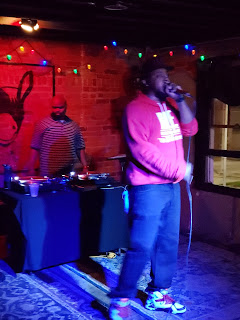 Next was Dolla Black, who I feel is one of the regions best kept secrets. But not for long, if I have anything to do with it. Ya'll have seen me talk about him in several different #CultureOverEverything shows I've put on in this year, and when I say as much as he's little bro (no relation), I'm a legit fan of his, and sometimes I get mad at him because he doesn't even know how good he is. He runs through his set blazing hot, till bout half way through he gets a little winded. He literally said, "Damn I know Marcel gonna do a write up talkin' bout 'My little Ju brother Dolla Black done gained 10 lbs since our show in Birmingham, now look at him,' smh."

Well you got damn right I'm writing about it lol. You know me so well.

While he's talking the DJ runs down stairs to go use the restroom. Niggas done had a FULL INTERMISSION during his set lmao. 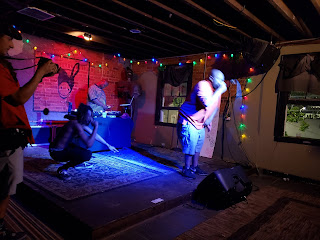 So the stage we're on is on the second floor. Before the These Are Weed Raps begins, TeeJaeSoHigh opens up the window and yell's at everyone to bring they "MOTHERFUCKIN ASSES INSIDE AND COME SEE THIS MOTHERFUCKIN SHOW!!!"

TeeJae is one of the most talented crazy negroes outchea on the scene, and along with his partner in rhyme Fat Bastard James, they always put together a dope show. They go back and forth with natural chemistry, and are really becoming seasoned performers as they are making a good name for themselves in the region. They both do solo songs, and then go into their group songs, they rock TF out in front of the home crowd. 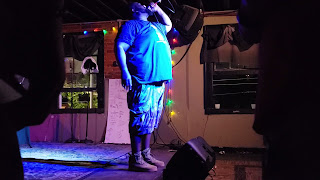 My time to go up. I begin myself with a tribute to brother Seth before I start rapping, much akin to what I wrote up top, just alot shorter.

"#CultureOverEverything" is a song that I like performing, but then again I don't. It's the only track I have with stabs and adlibs on it, and it's too close to rapping over vocals for me. This ironically, this has kinda kept me from memorizing it 100%, so I'm never fully satisfied with the execution of the verses. 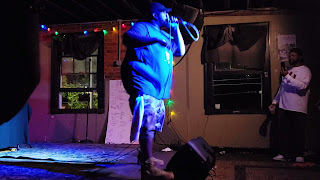 With all this going through my head as I'm rapping, I didn't realize I was so close to the tip of the stage. Mid verse, I take another step, and fall off the damn stage! 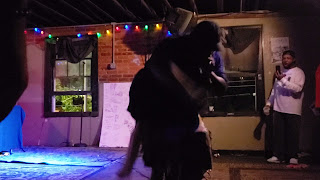 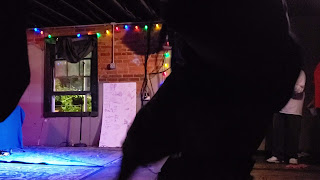 But, because I'm such a real emcee, I DID NOT MISS A BAR!!! Ironically this is the best I've ever executed the verse lmao. Thank God this wasn't no high stage. I was able to catch my balance and put my arm around Dolla Black and somewhat play it off, but still mane, shit lol. I get back on stage, and rock the hook, and the crowd is into it like a MF, lowkey tryinna hide the nervous energy from damn near witnessing a 400 pound, 6'4 nigga damn near bust his ass while rapping. By the time the second verse begins, I'm too discombobulated to remember it, so I cut it and go to the next record. My daddy used to say, "You gotta know when to let well enough alone." 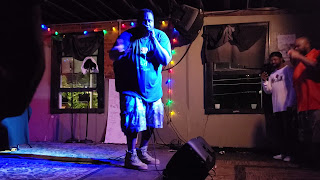 SHAKE BACK M. BLACK, SHAKE BACK

Now I have no more room for error. I go into "Principles & Standards" leading with a new chant, "Too many wack rappers, not enough emcees," and it goes well. Really well. They especially loved the "Real Emcees Dont Rap Over Vocals," chant. From there I went into "Henry Clay," and that bih was flawless.

I introduce "Black God Fresh" to Mobile and it's well recieved. Now it's time for "Hallelujah" before I rocked it, I tell the story of the first time I performed it in Mobile in October of 2017, and when I said "Fuck Donald Trump," the white people cheered, the Black people looked at me like "nigga u finna get us lynched." It goes over well this time, as it always does everywhere else.

I preach to the audience about how Trump is a piece of shit, and before I go into "FreeBLKPPL" I hear some loud ass talkin' outside. It's that wild ass nigga Teejai outside, the same person who fussed at niggas outside to come inside earlier, is now outside keeping up racket. So I stick my head out the window and tell HIM to bring his BLACK ASS INSIDE, and he yells back he went outside to smoke a cigarette. I bullshit-you-not, by the time I began the song, that nigga was back upstairs with 3 new paying customers lol. This nigga fast as he is wild lmao.

Teej, you're alright with me brother. 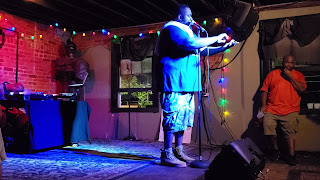 Now it's time for "Stare & Whisper." we went all the way to church with this one. The lawd was praised. After the set, we took group pics on stage, and talked to the homies and the people in the audience. Didn't sell much, but got a lot of love. Broke the tables down, headed back to the room.

Before I go, I gotta shout out my friend and biggest support in Mobile, Curtis. The look on Curtis'
face as I fell off the stage is priceless.

Merch: 2/5: Didn't sell much, when I normally do really well.