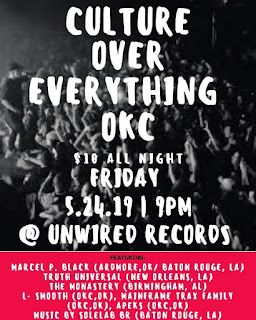 I'm doing something different with this one. I'm writing more from the standpoint of a facilitator, less as an artist. Reason being is the weekend was a blur, and theres' one consistent link between it all, anxiety. I'm what old country folks call a "worry wart." I try my hardest to keep a consistent level of self care poppin', but even still I deal with depression & anxiety. I book shows out of town all of the time in which I'm the headliner. The turnouts range from slim to dope, but I'm an underground rapper, so I'm used to it. This weekend was a little different as I was bringing people from Louisiana, Alabama, and Georgia to come rock at these events in my home state of Oklahoma in which I was curating. My guy Steph from Tulsa felt so bad he snubbed me when didn't select me for his World Culture Music Festival 3 last year, he gave me my own #CultureOverEverything Stage at WCMF 4.

At least that's the story I'm running with.

It's always scheduled Memorial Day weekend, which is perfect for me, because it's right after school is out, and every year my kids spend the whole summer with my parents in Ardmore. So it made sense for us to drive up because were already gonna be in the state anyways. To make it even more purposeful, I reached out to my guy L-Smooth for an OKC date, and he thru me in the mix with The Root where I gigged earlier this year the day before the Tulsa show in January. Part of curating my own stage for WCMF 4 allows me to select who I wanted on my stage to rock with artists from Tulsa. I chose Fade The Flow Sundays Alumni The Monastery from Birminghham, Paid In AmeriKKKA from Atlanta, and Truth Universal from New Orleans. I even brought my partner in Fade The Flow Sundays Sole Lab BR from Baton Rouge to be in the house DJ for both stages.

This is where my anxiety begins. Like I said, I've been in these underground rap streets long enough to know that I'm gonna deal with small crowds. I'm okay with that, but I'm super worried that my guys who I'm bringing from so far won't be. I swear, my people don't get to experience my highs, but it ALWAYS seems like they're there for my lows. On top of this, there's terrible weather brewing, with flash floods & tornado warnings the whole time we're supposed to be there. Sole Lab left BR @ 8am to get to the show in OKC the day of. Truth FLEW into Tulsa from NoLa. The Monastery had issues getting a rental, and didn't leave till damn near 12:30pm the day of the OKC show, and Birmingham is an 11 hour drive straight through. Paid could only make it up for the Tulsa show on Saturday, but even still their driving 13 hours through terrible weather to rock a stage I'm curating.

All this worrying give me stress, all these stressors gives me gout, along with eating wayyyyy to much red meat in my diet over the last few weeks. Blood pressure super high, so high it had my left foot on SWOLE. Wasn't nothing I was taking helping me, so I had to go to urgent care and get the shot in the butt, which is never fun. On top of that, one of most popular girls from graduating class is recruiting all the people from Ardmore that live in OKC to pull up. I also reached out to all my guys to pull up, so there's a level of anxiety of putting on a good show for my Ardmore people who don't know Marcel P. Black, only Bryan.

On top of this, about 3 weeks into promoting the OKC show, The Root closes down, for good. L-Smooth is working hard as he can to find another venue, and bout 10 days before the show we relocate it to Unwired Records.

I know this is a lot already, but I just gotta put it all in it's proper context. 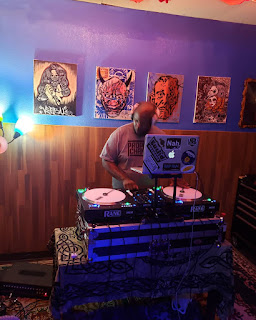 THE SHOW MUST GO ON

From BR to Ardmore, we got the mininal amount of rain. From Ardmore to OKC we get 0 rain, so I'm thinking the night is gonna be a good turnout if the weather holds up. My wife Jessyca and I check into the hotel, take a short nap, then head over to the venue, which I'm surprised to find out is a recording studio, not a record store. We're greated by Nathan, the owner of Unwired Records, and he's super friendly and accomadating. After I set my merch up Sole Lab comes in, shortly after Truth gets there, L-Smooth is there, and the 2 other opening acts. Maybe 5 more people come in, and then the got damn tornado warning is full effect. I'm talking POURING DOWN raining.

Bad bad. All my friends and family in OKC pretty much tell me they ain't coming, and the mf's who didn't say they wasn't coming ain't come either. It's like 12 people in the room, and at least 8 ppl are performing. I'm fighting between being embarassed because I brought people all this way to rap in front of noone, worrying if they gonna say I'm a fluke, and worrying about The Monastery who I'm telling to stop and just get to Tulsa instead of tryinna make it to the show. Them niggas was determined to make it to the show though, and while I appreciate that, I hate that I put them in that position.

After we figured out that noone else is coming, the first two local acts got up, and did really great jobs opening. Next was my OG, the New Orleans God Emcee Truth Universal, and he put on a clinic in professionalism. He wasn't fazed one bit that he flew all the way up to rap in front of noone, instead put on a hellafied set, as sharp as ever. This definitely lifted my spirits. 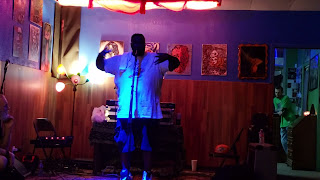 Ya'll know I'm super competitive right? My goal every single time I touch the stage is to murder everybody. But mane, between this low turn out due to the weather, and my young boys outchea literally driving through storms, I can't even hype myself up like I normally do. I start off with my intro, then go into "Bad Man." Decent call & response, as the small crowd of OKC emcees that were left weren't familiar with my music, and still wasn't sure how I was coming. Next I went backpack with "Principles & Standards," which really got the local rap guys into my set. As I roll into "Henry Clay," The Monastery walks in during the first hook, and I can relax a li'l bit and have some fun. This one goes over extremely well, till I damn near fell and bust my ass when the carpet got loose up under me. 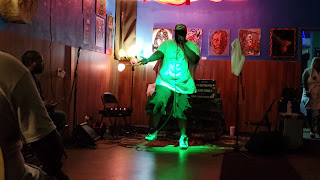 Now I feel that second wind kick in. Not that I was tired, but it's like I had a new boost of energy ready at my disposal so I can give niggas work. "Hallelujah," "#FreeBLKPPL," & "Stare & Whisper" all went over very well, as the OKC natives were very entertained and intrigued how my Southern Oklahoma born country ass incorporates alot of South Louisiana slang & vernarcular in my music. After my set, I sell a few items at the merch table to the OKC rappers, and go back in and watch The Monastery and L-Smooth perform.

I was soooo worried that all my guys were gonna be upset with me like this show was a full waste of time, by they weren't. They all told me thank you and went back to their rooms to rest up from a long day of traveling, preparing for another long day of traveling and performing. I break down my merch, say my good buys, hit Denny's with my wife, and go back to the room for sleep. Glad this day is finally over. 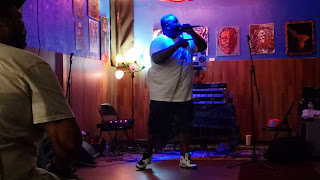 Crowd: 4/5. I have no plex with the crowd. Only taking off points due to turn out.

Merch: 4/5. Same. Sold something to all the OKC rappers. Didn't have the opportunity to sell to many people due to turnout.