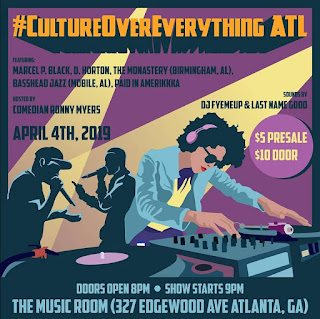 My first ever show in Atlanta was arguably the best Hip-Hop night at my life.

In March of 2013, my single "Trap Hop" dropped, and took off immediately. It became an overnight success, landing on the A3C Mixtape, and it was a great look for me. The "Trap Hop" EP was a mixture of my Black ass conscious raps and J-Filly's trap beats. Niggas was ahead of the curve like a mf. From the mixtape came the A3C Festival invite, which was my biggest look ever at the time as an artist. As a student of ATLien Hip-Hop, this meant so much to me, I almost couldn't believe it was real. So when October 2nd came, I gave what I feel is the best performance of my life on KevinNottingham.com's stage (please come back mane...) and it was epic. Mane this was the return show for Cannibal Ox bruh!!!! 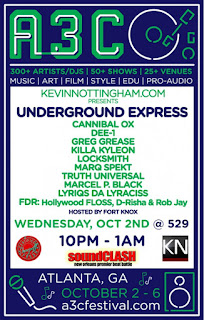 Long story short, I killed my set too the point I ended it tears to a crowd who were cheering for me at the top of their lungs. This fat country boy from Ardmore had made it to ATL, & gave work, That night, after my set. Kevin Nottingham himself said I had the best set of the night on his stage, and low key said he'd be interested in putting out a project with me on his new Hipnott Records label.

It never happened, thassa whole nother story tho. I fumbled like a mf.

I was also treated to dinner by Select-O-Hits the next day, offered a distro deal if put a label together.

That was my first time doing a show in Atlanta, the first hit of dope, and I've been chasing that Georgia Peach high eversince. The next few shows I did out there where not well attended. One time, outside a venue for a show I was headlining, I saw a crackhead try to return some crack to a dope boy like he had a reciept for it. He was in mid swig from a tall boy when the trap nigga punched him clean in his shit, and put his ass to sleep. The can of beer burst upon impact of the ATL summer soaked concrete, and all his crackhead friends cackeled as this DG Yola lookin' ass nigga told buddy, "Mih me wih dah fu shit, ol' bitchah niggah," and proceeded to step over him like Bubbachuck did Lebron's favorite light skinned coach after he crossed him and hit a 3 in his face during game one of finals June of '01.

The last time I went to A3C in '16, I had both my sets get canceled on me, and my merch bag got stolen. Then when I went in '17, me and the homie Ghost Dog almost had to fight our way out of a P. Stone Bloods infested pay to play/ over vocals rap showcase I ended up performing at, after I guy I went to college with claimed he had a show for me booked in ATL, but it ended up being in Jonesboro, Ga, and was basically some bullshit.

So as much as I love Atlanta, I kind said I wasn't doing anymore shows there. 'Till I met J-Coop and Last Name Good aka Paid In Amerikka. I brought them to Fade The Flow in '17, they in turn brought me to their showcase "Elevatorz" in March of '18. I had such a good time, I asked to come back this spring. They obliged. Even let me call it "#CultureOverEveryThing ATL." 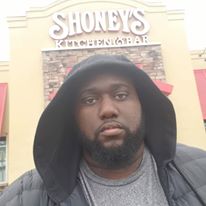 At the end of '18, I did a #CultureOverEverything Baton Rouge, show, which featured my favorite indie group The Monastery from Birmingham, Alabama, and my favorite indie rapper D. Horton from Columbus, Mississippi, now living in Atlanta. Our show was so dope, I told them, let's do a quick tour run together in '19. We ain't gotta live in the same city to rock shows together on the road. So when it was time for me to start routing to promote "4Tha CLTR," I figured I could run with my guys for these 3 shows. I need people that's gonna make me step up my game, and these niggas are the truth. It's lit. Everybody eats. Buffet style.

The night before I leave to go to ATL for the show, I stay up mad late tryinna make sho the crib scraight for wife & kids since I know I'm finna be gone for a few days. I fall a sleep at 4 am, up at 7:00 am to get the kids ready to drop at school for 8:00 am. KP Soul arrives at my house at 8:45 am, I pick up Mark Dub at 9:15 am, I'm damn near driving with my eyes closed by the time I get to Mandeville at 10 am. I pull over and let Dub drive. I sit in Amari's seat in the #RapDadMinivan and go scr8 to sleep. 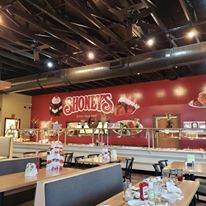 We get to I Can't Remember Where TF We Were, Alabama, and niggas is hungry. Out the corner out my eye I see a Shoney's.

Mf's even had early 90's buffest prices. We ate, I got back in The Cartoon's seat, and went back to sleep. 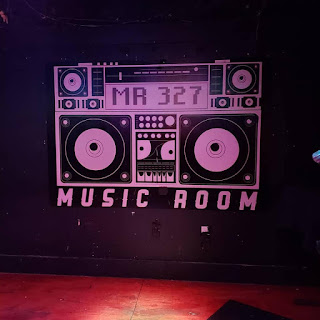 Doors open at 8 pm, we pull up to our hotel in ColliPark at 7:45 pm, late atf.  I text Good to tell him we were running late, and he informs me we have time, because No Suh Foster, an incredible emcee from Mobile, and 1/3 of a dope Hip-Hop crew BaseHead Jazz's Pop's just passed away, so they weren't coming.

I love my Pop's so much, I can't even imagine. I haven't been able to speak to No Suh directly, but I did send my love & condolences through mutual friends, and I wish nothing but the best for him and his family as they navigate these tough times. 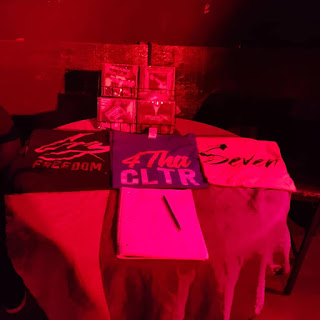 So now I'm kinda in a strange mood, but the show must go on. I get to the venue, set up the merch table. My li'l bro Ronny My, aka Comedian Ronny Myers, is someone I used to take on the road and mentor with this rap shit in BR before he moved to Atlanta, switching from emceeing/producing to comedy. He's making great moves in ATL, and I'm really proud of him. Ronny is a natrually funny guy, prolly one of the most charasmatic ugly niggas you gonna ever meet. He knows that lol. Cool as mf and a pleasure to be around. When I booked the show it only made sense I get him to host.

No cap, the crowd was kinda light. Ronny makes a joke about it, and I'm like come on bruh, shit lol. My bro Big Sant Bitch Motherfuckin' OG pulls up, and we get to runnin' it, till the show starts.

This is the Monastery's first real show in ATL, and I'm happy to be able to share my platform with them. These dudes are super fucking talented, and they kill. You're gonna hear me talk about them alot, because I love them as good young men and as rappers, but I really believe in them, and if I ever get a bag I'm signging them off rip, if they haven't already made it big enough to sign me. 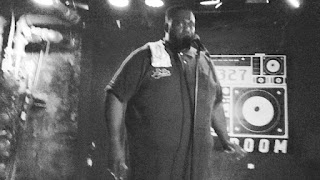 I come out & kick my intro "daddy sang gospel" acapella at the mic. I need to name that bih, register, so I can get me some BMI Live performance royalties, as much as I do it. Hmmmm....

Where was I? Yeah, I get a few ooh's & ahhh's after a couple of lines, so I know it's finna be lit. I tell DJ Fye Me Up to run that "Bad Man" and the call & response goes as expected. I keep it southern with "Live My Love" & "Black God Fresh," the latter being a song that's gonna be real big for me once the album campaign begins. I then dig into my backpack and pull out "Principles & Standards," and they rock with it, especially the "real emcees don't rap over vocals" chant at the end of the song. At the end of the call I & response, I say "underground kang bitch, don't ever call me local," and Ronny yell's out, "That needs to be on a shirt!!!"

I then dig further in my back pack and pull out "Henry Clay." My bro Quanstar and the homie J Bizness came thru to support too, and I can see they really appreciated the KRS sample on the beat. Next I get into "Seven" with "Hallelujah" & "#FreeBLKPPL," and both of them go very well. Even though Atlanta is the epicenter of mainstream/commercial/pop rap, it's still Black af, and they appreciate all the trashing of Trump, so both songs went off. I bring KP Soul up to the stage and we end up in church on "Cry Freedom."

Dave closes the night out, and mane is that MF cold. I sell some merch, breakdown the table, preach to Paco for a second outside, go by Cookout, and head to the room. Oh yeah, they ain't got no more towels, so we go on a dummy mission to Walmart, only to find out the were closed.

Head back to the room, sleep, get up & get ready to go to the next city.

Yeah, we coulda went to the booty club, but niggas was tired. Plus my favorite strip club/favorite dancer is in Birmingham anyways, let's save these ones. Good show ATL. 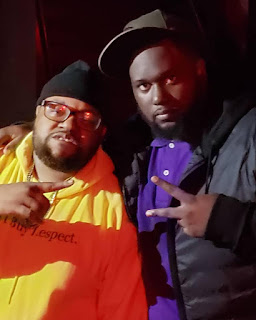 Venue: 4/5. Dope ass venue, I love it. Only thing I didn't like was the lighting. I looked at the footage Mark took of the show, everything dark as tf.

Crowd: 4/5. Small crowd, but very receptive to what I did the whole set. No complaints.