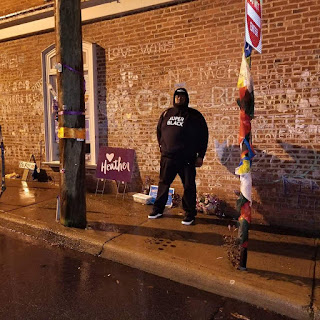 When I dropped the project "Seven" (you can stream/buy it here) back in September of 2017, "Hallelujah" was NOT the single. But when I started performing it, I didn't have the show track with a hook on it, so I had to come up with a call and response hook that would keep the crowd entertained. I came up with a chant that says "F*ck Donald Trump," and crowds all over the country loved it. I didn't release any videos for this project, my focus was just hitting the road, gaining fans the old fashioned way.

In 2018, when I had the opportunity to route a tour date in Charlottesville, Virginia, I knew I had to shoot the video there. Shoot a video for an anti-Trump song in the place where racist white folks where burning tiki torches? Absolutely. I was introduced to Alex C. Brown aka Wicked Weed via Fellow Man from Rugged Arts, and we created something that's powerful.

Click to watch the video here, or watch below.